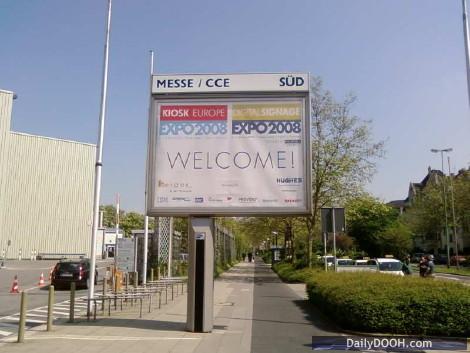 It seems churlish to be criticising an ambitious event, but the standard for such exhibitions is getting ever higher (I’m thinking Screen Expo and ISE here) but visitors to shows these days tend to have incredibly high expectations.

I was at Digital Signage Expo in Essen the whole of last week and here’s my personal take on it.

First of all, one thing that disappointed me prior to the event was the lack of clear information about exhibitors (and indeed the speakers at the conference – far too many TBDs). The event website should be a useful tool when planning your visit – think of the Screen Expo system of being able to pre-book meetings before you go!

And when you get to Essen you realise that the ‘Messe’ or exhibition area really is quite large with several entrances separated by different underground stops – so it would have been really helpful to let us know which one to take (‘Sud’ as it happens) on the web-site in advance.

Like a lot of other people, I didn’t fancy the idea of paying out hard-earned cash to attend a presentation of someone promoting his own company and as a result the conference rooms were about 20% full on the occasions that I went by.

Checking in using just my reference number was easy – I picked up my badge and was soon inside the hall – which was all fine until people looked at me strangely when I told them my story, which didn’t fit at all with my ID – I noticed that I had morphed into a Spanish creative designer called Ignatio !!! The reference number was quite correct so I decide to live for a couple of days with my new persona!!!!

At the entrance the visitor was greeted by Digital Signage Expo putting its money where its mouth is, by using digital paneling to show the exhibition layout and presentations diary, which was fine at a distance, but when you got close up to read the detail the technology couldn’t cope (or rather the type was too small) so all you get was pixels.

However, talking to several exhibitors, other problems emerged and several grumbled about the organisation.

The hall was ostensibly divided into two parts – one ‘Kiosk’ side and one ‘DS’ side – which was probably how it started out, but it didn’t end up that way. I found one quite important German DS integrator tucked away in a back room next to an Asian gentleman selling widgets for the entrails of Kiosks and another one buried in between printers and cash machines in the Kiosk ‘side’ – neither of them it seemed were ‘happy campers’ 🙁

Having identified who you wanted to meet (requiring either divine intervention or intuition) and having found them on the plan (right or left side of the hall) it was then still difficult to locate their stands – while it may have made sense on the plan, life on the ground was less simple. The aisles and corridors weren’t labeled or numbered so the only clues were discreet little white notices on each stand as a guideline (next time I think I’ll camp outside and sell GPS systems to the hapless visitors).

Speaking of visitors, where were they? This was the biggest grumble by the exhibitors that I met. On the first day, the (one) restaurant which looked like it could seat about a hundred was actually full up (were they surprised?) so on the second day they added 6 stand-up tables. No doubt the organisers will trumpet their success as organisers always do, but it would interesting to have some more objective figures, such as ‘useful contacts made’ from a handful of exhibitors.

I was reminded of the conservative nature of German retail which takes time to adopt new procedures. For my first visit to an event of this kind in this country, it was still extremely useful and although some key players were probably absent, it was good enough to give an overview of the market.

This entry was posted on Tuesday, May 13th, 2008 at 10:31 @479 and is filed under Scuttlebut. You can follow any responses to this entry through the RSS 2.0 feed. You can leave a response, or trackback from your own site.

2 Responses to “A Parisien’s View of DS Expo, Essen”