Dos Dosanjh from Cisco was at it again, one minute in London at KioskCom and the next in New York at KIoskCom / The Digital Signage Show. 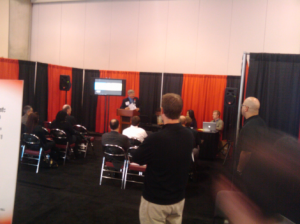 Show and Tell did the best job but that’s not surprising given their credentials. Day 1 of ‘Cooking Up Content: From Concept to Screen‘ saw crowds 4 deep in the aisles listening to the speakers and watching the spectacle.

This was a good initiative by the organisers which would have been all the better if Cisco weren’t involved. I guess they (Cisco) could have sponsored it instead of Harris (thanks Harris) but hey ho that would have involved Cisco putting its hand in its pocket and spending money.

Postscript. Show award for best giveaway goes to Harris for their barbeque baster!!! Great giveaway (seriously) – all we need now is an English summer to make use of it

This entry was posted on Wednesday, November 11th, 2009 at 18:20 @806 and is filed under Scuttlebut. You can follow any responses to this entry through the RSS 2.0 feed. You can leave a response, or trackback from your own site.