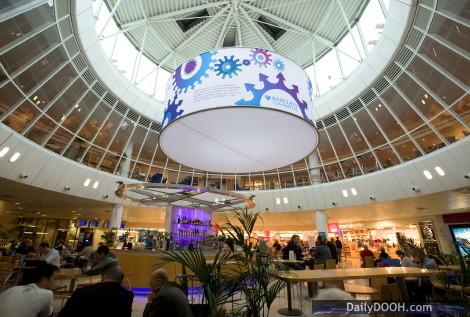 Planned by Walker Media, here is Eye’s official press release following on from our photos of last week…

Walker Media, prove themselves yet again as deft marketers via this execution. “All involved recognise now is the time to be strengthening advertising and running tactical and brand campaigns despite unpredictable climatic conditions” commented Inigo Melis, Head of Agency Sales for EYE. “Barclays Commercial Banks most recent advertising strategy at Manchester Airport activity showcases this in all shapes and sizes.”

Via a commitment to Terminal 3’s Business Lounge Drum and the highly sought-after new large format landscape digital site, Barclays Commercial have ensured long term messaging at the heart of the business precinct and confirmed engagement with business travellers in the airline lounge, who are otherwise difficult to reach.

Barclays Commercial Bank are the 2nd advertiser to lock in a long term investment and commitment to EYE’s new large format digital site, taking advantage of the immediacy of the medium, and the impact of the site.

“The size and nature of the market in Manchester makes the region a prime location in Barclays Commercial Bank’s northern expansion. With a high volume of business travellers, Manchester Airport provides an environment that is befitting with the stature of Commercial Bank and Barclays’ global aspirations.

In order to maintain the momentum of last year’s re-branding campaign, our key planning principle in 2008 is continuous profile-raising in a bold and visible manner, and the large hanging drum near the business class lounge was an obvious choice for us.

We strive to differentiate the brand from the competition and coordinate everything we do with Commercial Bank’s forward thinking approach. Eye Corp’s innovative approach to digital advertising created the country’s largest screen of its kind, the end product has a natural synergy with our ambition.”

“There are only limited opportunities in today’s fragmented media landscape to reach this profile of passenger and the professional advertisers in the finance sector are quick to lock them up…” added Melis. “This digital site targets 100 % of departing passengers in an airport which boasts a near 50% business audience.”

“Manchester Airport has recently undertaken a hefty redevelopment plan at significant cost to deliver a world class travel experience, and EYE has matched this commitment with ongoing investment in new digital media. This investment is now being recognised via ongoing campaigns from some of the markets top advertisers” said Catherine Cooper EYE’s UK marketing manager.

This entry was posted on Monday, June 23rd, 2008 at 12:53 @578 and is filed under DailyDOOH Update. You can follow any responses to this entry through the RSS 2.0 feed. You can leave a response, or trackback from your own site.