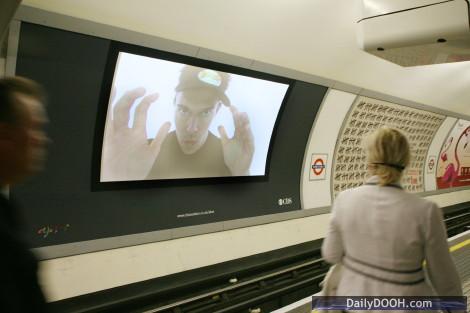 Cross-Track Projection, originally trialled at Euston station on the Victoria line platform in 2007, London commuters over the past few days would have seen a few more XTP systems become operational as CBS Outdoor officially launch the network.

Here’s the press release from CBS Outdoor on the cross-track projection rollout.

Nestlé, Sky, Magners, Paramount, InBev and Dewynters have signed as the official launch partners of Cross-track Projection (XTP), CBS Outdoor’s revolutionary digital media opportunity on the London Underground – a world first in terms of its screen size and sophistication.

From today giant cross-track screens (the equivalent of 14 ft TV screens) will beam soundless commercial content in full motion and HD quality at 23 sites at five of the busiest stations in the capital’s centre.

Piccadilly Circus, Bank, Liverpool Street, Euston and Bond Street have all been fitted with the hi-tech projectors and giant screens, each linked to a new digital advertising network enabling partners to remotely update their messages on a 120’ loop, at the touch of a button. The partnerships will run for a minimum of 6 weeks from 30th June.

Sky and Nestlé have opted for an all-day presence on the sites, using different dayparts and 20’ spots in each loop to promote their distinct divisions or brands.

“The introduction of XTP is a landmark event for London media – I have no doubt in my mind that it is the single most significant media launch since Channel Five.

“It’s the medium for the capital – cutting edge, capturing and captivating consumers and offering outstanding flexibility for advertisers. This launch has been three years in the making, working with best in class partners and consulting the industry every step of the way.”

XTP is the highest spec and most cutting-edge projection system in the world*. Designed specifically for the Tube environment in conjunction with Digital Projection, XTP’s HD capabilities in addition to the quality of the projection means that the image brightness and overall quality of presentation is superior to anything else that is currently available on the market.

To date CBS Outdoor have installed across the London Underground 1034 digital screens, including 181 LCD screens, 830 Digital Escalator Panels and 23 XTP screens. In total, CBS Outdoor’s £72 million investment programme will see the installation of 2000 digital screens across the Tube network, including 150 XTP screens. It is anticipated that by the end of 2008 the programme will be between 95-100% complete.

This entry was posted on Tuesday, July 1st, 2008 at 00:37 @067 and is filed under DailyDOOH Update. You can follow any responses to this entry through the RSS 2.0 feed. You can leave a response, or trackback from your own site.