Viewtopia is showcasing five days of music, live performance, interview and event content through technology, marketing, and content partners: Justin.tv, Zannel, Blip.fm, Tap 11, Whole Foods Market and Planet-Tek.   It is streaming the programming to a large-format plasma screen at the entrance to the Whole Foods Market’s Lincoln Park, Illinois, flagship store as well as throughout WFM’s dynamic storewide digital signage program called The Marketplace Station, as well as through all partner networks.

“We call this collaboration ‘interactive reality TV in real time’: true device-agnostic convergence content,” says Heidi Richman, Future Content LLC founder, in a press statement. “The outbound content (which will get home page placement on both Justin.tv (social videa creation and sharing) and Blip.fm (social music service) is a really important part of the content flow, but due to the interactive nature of our partners, it is the inbound, viewer-supplied content that makes Viewtopia special. We broadcast with, not at viewers.

“We’re delighted to have Whole Foods Market, Wente Vineyards, and the rest of our partners to help launch Viewtopia and Future Content LLC. The brand, marketing and advertising implications are major, and a large part of the innovation is lead by our tech partners. Through Tap 11’s involvement, we can offer back-end metrics unparalleled in traditional broadcasting, and with the DOOH piece, we are doing so where 70% of buying decisions are made: at the point-of-sale.”

After this week’s festivities, Richman is taking the Viewtopia concept to New York City, with the launch of Viewtopia: In Vino on April 11, featuring winemaker Karl Wente, and a special performance by The Antlers.

Viewtopia: In Vino is tapping into In Vino and ABC Wines’ community to create music/wine/food salon events that combine informative tastings with acoustic performances from some of the most buzzed-about independent artists. Though limited to only 50 guests at In Vino, cyber guests worldwide can again join and ‘taste’ in real time, thanks to Viewtopia’s technology partners.

Future Content LLC is primed to take advantage of all the new opportunities in content creation and delivery, with particular attention to in-store DOOH digital solutions and live streaming: a true convergence content that translates seamlessly on any device, any platform, with which users anywhere can actively participate and contribute.

The Marketplace Station concept is owned and operated by Planet-Tek Systems, a privately held company in Markham, Ontario. It will be expanding its managed services across Whole Food Market locations and other leading retail affiliate locations, to continue offering marketers the ability to reach their target demographic through highly targeted media such as digital signage. 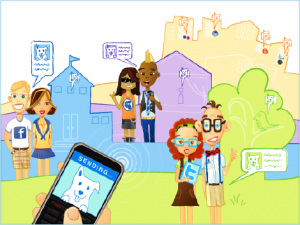 With Zannel, users can post updates and can send photos, videos, and longer tweets via their mobiles instantly at an event, and at their local Whole Foods Market.

Tap 11 is the intelligent twitter client that provides businesses the best analytic and CRM tools to monitor, engage, and grow their real-time audience. With Tap 11, companies can listen to conversations about their brands and products throughout the festival; separate the important online conversations from background noise by sorting people in Austin by influence; manage how corporate teams communicate with their customers on Twitter from anywhere; and see their successes as they happen with ‘per tweet’ analytics and a comprehensive analytics dashboard.

And Wente Vineyards, California, is the oldest continuously operated family-owned winery in the U.S.

This entry was posted on Wednesday, March 17th, 2010 at 08:44 @406 and is filed under DailyDOOH Update. You can follow any responses to this entry through the RSS 2.0 feed. You can leave a response, or trackback from your own site.