Students at 94 top universities across the UK now have the ability to select and schedule music content on the Subtv national screen network from their iPhones. How cool is that? 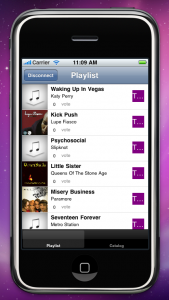 ul Dingle, CTO of Subtv told us “We are really excited at this launch and the way it has been immediately adopted by the students, particularly as this is part of a larger programme to deliver ground breaking interactive engagement through our network”.

Subtv launched their iPhone App called ‘Subtv Touch Screen’ which allows each student to control and schedule particular tracks to appear on the Subtv system in their venue.

They can also attach messages and comments to these selections, which then appear on screen during the broadcast of their chosen content.

The student choices feed a play list which plays out as the tracks are added to the play list. As the students vote for tracks, these get promoted up the play list so that the more votes a track gets, the higher it rises. They can only vote once for each track and can schedule the same track only once a day.

There have already been over 1,000 downloads and in the last seven days, over 5,000 separate selections have been made.

Subtv is already talking to sponsors who are interested in sponsoring the facility. With 12,000 selections each week from the iPhone and its touch screen network. Subtv is building a running database of the most popular music among students.

Oli Walker –Student Officer at St Andrews University Union also said “This is a really fantastic addition to the features on Subtv and one that our students have been quick to use. I have had a lot of great feedback from our students.”

The iPhone app is just the first of several new Subtv applications that will allow a direct integration into the system and provide more control over choice and content for students.

This entry was posted on Wednesday, March 24th, 2010 at 11:16 @511 and is filed under DailyDOOH Update. You can follow any responses to this entry through the RSS 2.0 feed. You can leave a response, or trackback from your own site.