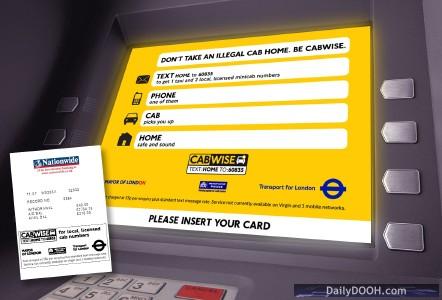 I have often advised networks that local goverment agencies / bodies are a good source of regular income. It surprises me that the leisure: pubs, clubs, bars networks don’t get given more ‘safety’ campaigns for example.

Anyway, hats off to ATM:Ad who have just secured this two week TfL “Safer Travel at Night” campaign, which starts October 8th 2007.

The Safer Travel at Night campaign involves the Greater London Assembly, TfL and the Metropolitan Police, and is designed to encourage the use of a safe means of transport (such as black cabs and licensed mini cabs) and public transport.

The ads, which have been booked by Kinetic, will run at cash machines situated in tube stations and at universities in the London area, encouraging people to use CABWISE, a texting service, which provides the numbers for a black cab or licensed mini cab office.

This campaign I would have thought would also have worked well for Avanti Screenmedia and Brightspace Media (leisure: pubs, clubs and bars) and Student Union TV (subTV) but I don’t believe anything has been booked or discussed.

This entry was posted on Tuesday, September 18th, 2007 at 13:14 @593 and is filed under Scuttlebut. You can follow any responses to this entry through the RSS 2.0 feed. You can leave a response, or trackback from your own site.