Art for Commuters and Onestop Media Group, both based in Toronto, have issued a call for submissions of one-minute silent films for the 4th annual Toronto Urban Film Festival, with a July 15 deadline for entries. 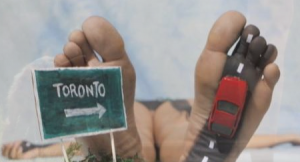 TUFF is the only true ‘underground’ film festival of its kind in North America reaching an audience of over 1 million daily on Onestop’s Toront Transit Commission network of digital displays on subway platforms. Recently honored by the Canadian Marketing Association with an award of distinction for its media innovation, TUFF features seven different urban-themed categories of one-minute silent films, running every 10 minutes during Toronto’s festival fever in September. This year TUFF will include more specially designated screening areas called “TUFF Film Zones” at Dundas, Queen, Union and the Yonge/Bloor stations, where the festival will screen nonstop for 10 days.

“TUFF engages the community in which it operates in a digital fashion indicative of today’s social behaviors and trends,” says Michael Girgis, Onesto CEO and president. “TUFF has an innate ability to be ‘shared’ far beyond that of the subway platform. This year’s online social media extensions will help extend that experience. We are excited to see and share new TUFF films with the community and encourage TUFF fans to visit the new mobile compatible website, up-load a film, search the new film library, leave a comment, vote for the best, join our Twitter and Facebook groups, and so much more.”

Sharon Switzer, director of TUFF, says, “We are pleased to offer an artist fee to each and every filmmaker selected to take part in TUFF, thanks to funding from the Canada Council for the Arts. This – and the fact that the festival has one of the largest film-going audiences in the world, as well as a robust online film viewing experience – makes TUFF a truly rewarding festival for filmmakers.”

TUFF filmmakers can look forward to over $10,000 in cash and in-kind awards and Trinity Square Video will offer seven filmmakers a complimentary membership and up to $600 of in-kind support towards the production and post-production of their film, animation or video.

Final film selections are made by a jury of programmers, filmmakers, curators and academics. The top three films of the festival are chosen by a guest judge who will be announced later in the season. Further information is available at the TUFF website: www.torontourbanfilmfestival.com

This entry was posted on Monday, April 12th, 2010 at 08:50 @410 and is filed under DailyDOOH Update. You can follow any responses to this entry through the RSS 2.0 feed. You can leave a response, or trackback from your own site.