After Beta testing for a year, Healthy Advice Networks officially launched four months ago and already has 1,860 doctors in 425 locations signed up across the U.S.. 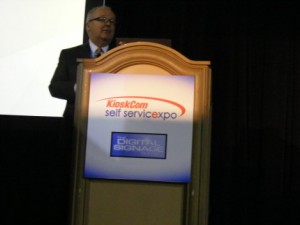 Tom Campbell, executive vice-president, product management and development, Healthy Advice Networks, gave a fast background on establishment of the Physician’s Network to a small but appreciative audience during KioskCom’s second day of show and events.

He was introduced by Dusty Lutz, general manager, NCR Netkey, Kiosk and Digital Signage Solutions, with whom Healthy Advice Networks worked in establishment of the network.

“We’ve already hit our goal in terms of doctors and locations for 2010,” said Campbell.

The Physician’s Network in truth is six different networks: two for primary care and others specifically geared to rheumatology, obstetrics/gynecology, dermatology, and cardiology. This allows pharmaceutical companies, OTC product manufacturers and others to reach the doctors targeted without wastage. Advertising takes up one-third of screen time with the remaining two-thirds taken up with content that is of specific interest to doctors and their staff.

“Doctors are time-stressed yet need to keep up-to-date and have to work with Medicare billing rules,” said Cambell. “Pharmaceutical reps have a hard time getting in to see them: 40% require reps to make specific appointments to meet them, and 25% of doctors don’t see reps at all. Yet pharmaceutical companies have information that can be valuable to them.

We wanted to develop a screen solution that would be available to the doctor in his/her office area, totally separate from screens in waiting areas that inform and entertain waiting patients and front office staff. The doctors wanted content for themselves and for their staff. It had to be credible and relevant. Any screen units couldn’t be bigger than 26”, self-contained, capable of being managed by staff, non-intrusive and with minimal sound.”

Sponsors also had various requirements – among them, fresh content, complicit with regulatory information, and capable of running 15-, 30-, and 60-second messages.

“We went to Netkey to help develop and create the platform,” Campbell said. “It was important to get them on early. And we went to Terranova to learn about cellular broadband, and imported screens from Taiwan.”

Healthy Advice also approached several partners to bring in news plus Accuweather for information about the weather, because weather can affect people with certain medical conditions. Screens are divided into four zones, with the largest section for breaking medical news and another section for staff news. The bottom is for local impact information and weather, and for logos, time, and pop-ups. The zones can be blown up depending on needs, and doctors can add their own messages. Further, the doctors can be alerted through the screens about the number of patients in the waiting room; and can get Twitter alerts. The screen information is also integrated with a web site.

Healthy Advice doesn’t plan to increase the number of doctors and locations unless/until it can show that the system also raises prescriptions.

And, despite the trend to measurement, the company had no plans for auditing, concentrating instead on the number of pages and adjusting the cost per doctor.

This entry was posted on Monday, April 19th, 2010 at 07:53 @370 and is filed under Scuttlebut. You can follow any responses to this entry through the RSS 2.0 feed. You can leave a response, or trackback from your own site.