DailyDOOH Versus The Volcano

At the moment Eyjafjallajokull is definitely winning but the British stiff upper lip is holding steady and we are convinced we will prevail. 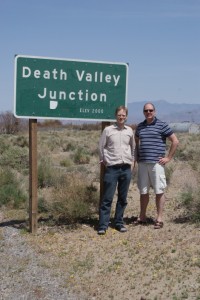 Half a dozen folks we know of including some DailyDOOH staff have been stuck in Las Vegas (yes yes yes there must be worse places in the world to be stuck) since the end of last week (industry people over of course for #NABShow and #Kioskcom) what with much of the European airspace being closed as a result of eruption of said Eyjafjallajokull Volcano.

People from Virgin flights last Friday and Saturday are being pushed back to the 6th, 8th and 11th May – our very own AHN’s flight which was supposed to be last night (Sunday April 18th) was cancelled (of course) and he won’t be on another flight until Tuesday April 27th.

If my Virgin flight home on Friday 24th April doesn’t happen then any likely return date might mean it is better to stay here until InfoComm!!

This entry was posted on Monday, April 19th, 2010 at 16:54 @746 and is filed under Scuttlebut. You can follow any responses to this entry through the RSS 2.0 feed. You can leave a response, or trackback from your own site.