Miyamoto Musashi Having His Fortune Told 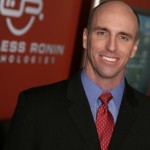 Wireless Ronin just named Scott Koller as president and COO, effective 7th May – that’s strange as Scott has a technical background and many would not necessarily see him in that new role.

Anyhow, James C. Granger will remain the company’s CEO through 31st December 2010 unless extended by mutual agreement – as some in the industry might say “that’s probably when the money runs out anyway!”

This unfortunately is a train wreck waiting to happen.

This entry was posted on Wednesday, April 21st, 2010 at 22:47 @991 and is filed under Scuttlebut. You can follow any responses to this entry through the RSS 2.0 feed. You can leave a response, or trackback from your own site.