After the giants of tennis had slugged it out on the centre-court, some of us ex-music bizzers went out on a ‘lig’ at the champagne-soaked Adidas VIP Room at the Roland Garros Tennis Mecca in Paris. The pretext was to confirm the affinity between tennis people & the music business. In France, Yannick Noah makes the point very well and is probably now better known as a pop star than as a tennis star. Yannick himself couldn’t make it last night, but his drummer, an old friend, Hervé Koster, was there launching his new band, The Gents (a power trio ‘inspired’ by The Police – not a public convenience) and told me that he will be playing the Stade de France on September 24th with Yannick’s band – now that’s a 50,000 capacity venue – so who needs tennis?

And what’s all this got to do with DOOH? 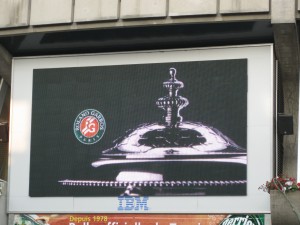 Not much really, just interesting to note how widespread big screens are these days. Roland Garros is well equipped with massive signage boards updating the scores, and big screens around the courts so that the public can experience the same close-ups of tears of joy & frustration as TV viewers. But this one above the chip shop caught my eye – all evening this beautiful rendering of the winner’s cup was turning tantalisingly above the main pedestrian area, a reminder of what it is all about:

Meanwhile, I hear that Trigger Finger, an impressive punk-rock band with a grey-haired singer have started, so it’s back inside for another glass of champagne – Cheers Adidas! Impossible is indeed Nothing.

Not sure of the etymology, maybe connected to ‘gig’.

A ‘lig’ is when you go to somebody else’s’ gig, drink the free beer (or champagne) ignore the artist, talk loudly at the bar during the show and stagger home complaining about was a lousy gig it was…

This entry was posted on Thursday, June 3rd, 2010 at 12:00 @542 and is filed under Scuttlebut. You can follow any responses to this entry through the RSS 2.0 feed. You can leave a response, or trackback from your own site.