Toronto-based Outdoor Broadcast Network, in operation since 2002, is closing down its network operations, citing a combination of an advertising downturn and a reluctance by its major investors to put funds into upgrading the infrastructure, 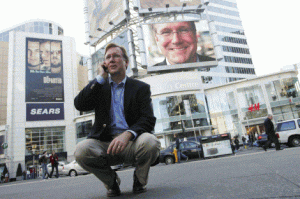 OBN will continue to operate its digital and static signage in Toronto’s Dundas Square area on the Eaton Centre Media Tower and Concourse at Yonge and Dundas , its screen at Bay and Dundas, and in parts of the Eaton Centre.

“We had some good years, but we’ve been losing money for the last year and a half,” says Peter Irwin. “Some of our network structures need upgrading, and at this point, the small merchant bank that is the majority owner decided that it didn’t want to invest more funds. We agreed.”

In addition, Irwin says that, in tough advertising times, it’s the tertiary media that’s the first to be cut off the advertising plan.

“Everybody in the business is feeling it, and we decided that we didn’t want to start over again,” he says.

Of the approximately 36 screen network in about 14 markets across Canada, some of the screens are owned by affiliates. Irwin says he is facilitating the recommendations for a company to take over their advertising sales. The screens owned by OBN are up for sale and are expected to be sold off separately rather than as a full network.

“We’ve already had a lot of interest from several different companies,” says Irwin, who estimates the current DOOH field in Canada at about $50 million while more companies are continuing to enter the field and vying for a share of the pie.

OBN will continue to operate its Toronto screens with a minimal of staff of four, including co-founder Brian Boyce, a vice-president sales and a customer service and scheduling person as well as Irwin – who will also continue with his consulting business.

This entry was posted on Sunday, July 18th, 2010 at 13:01 @584 and is filed under DailyDOOH Update. You can follow any responses to this entry through the RSS 2.0 feed. You can leave a response, or trackback from your own site.