If Turtle Bay Technologies (registered in the UK, Company No. 06729738) is, as many people believe, behind the incorporation of Minkus EDS who exactly is behind Turtle Bay? 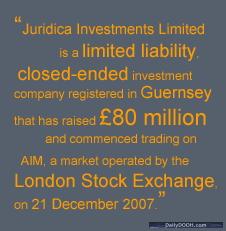 Juridica Capital Management Limited describe themselves as a lawyer-owned financial services company operated in an investment banking tradition and focused exclusively on capital and finance for corporations, law firms, lawyers, and claim-holders worldwide.

However it gives you a sense of their modus operandi. This is time, seriously for the industry to stick together.

This entry was posted on Monday, August 16th, 2010 at 14:35 @649 and is filed under Scuttlebut. You can follow any responses to this entry through the RSS 2.0 feed. You can leave a response, or trackback from your own site.