Noxel AG has launched a tiny new solid-state digital signage player capable of playing out conventional and 3D video at full 1080P, and built to run flawlessly in the field for months or years. 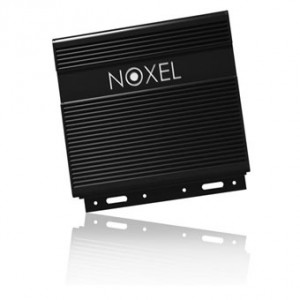 Designed and manufactured by Tessin, Switzerland-based Noxel, the new NXDS600 player couples a Blu-ray video engine with an IPTV-class processor to deliver an ideal hardware solution for the demands of medium to large digital signage networks.

The device is not a personal computer, which greatly increases reliability rates in the field and minimizes installation and management requirements.

There is no operating system in the units, and that has many implications, says Farbod Sadeghian, Group CEO. “There’s no extra cost for software or development. Operators will see fast, consistent boot-ups from these devices. And there are no more blue screens. This is part of a robust streamlined, framework designed for and dedicated to digital signage applications.”

The NXDS600 is also designed to both simplify and speed up deployments. As soon as a device is turned on and establishes an Internet connection, it will recognize the network setting, register itself to a designated server. Nothing else needs to be done locally.

“People with no IT skills can plug in this unit and get it running,” says Sadeghian.

The NXDS players are among the first on the market to specifically address the core reliability, maintenance and overall operating cost demands of large-scale digital signage network operators. The units have no moving parts, with industrial cooling fins on the casing dissipating any heat generated by the low temperature processor. The players use solid state SD and internal USB-based memory to remove any needed for a rotating hard disk drive, a common point of failure.

The players are part of the Xtream series of players being developed Noxel, which has been designing, engineering and manufacturing media technology and IT solutions for more than a decade. Though substantially more powerful in play-out capabilities, the company says that unit costs for the NXDS600 players are sharply lower than similar solid state devices on the market and in line with the average costs of small-form factor PCs (with moving parts) now commonly used in digital signage projects.

The Xtream series works with Noxel’s proprietary NXCM content management solution for digital signage. A web-based platform, Noxel makes the system available as a fully-managed Software as a Service solution, or network operators can buy the server software solution and host and manage on their own.

Noxel is in the process of building up a global roster of distributors and resellers.

This entry was posted on Monday, September 6th, 2010 at 08:37 @401 and is filed under Scuttlebut. You can follow any responses to this entry through the RSS 2.0 feed. You can leave a response, or trackback from your own site.

2 Responses to “Noxel Player For Video And 3D Playback”