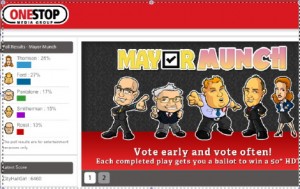 “Mayor Munch” is accessible online at: www.playonestop.com and is being promoted to over 2 million people using Onestop’s Digital Out- of-Home Networks in the Toronto Transit Commission subway system, Toronto District School Board, and on its Networks in residential high-rise buildings across Toronto.

‘Mayor Munch’, developed by Fourth Wall Media (also headed by Girgis), features real time live poll results.
Users are asked to play as one of the five selected mayoral candidates while the other four candidates move around the board in Pac-Man style. By choosing a candidate to play as, users participate in a online poll.

The digital and interactive campaign targets largely what is recognized as an untapped voting community of 18–to-34 year olds. 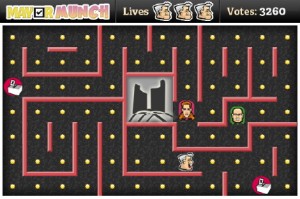 “As a group of young entrepreneurs immersed in the digital landscape ourselves, we have the unique insight, capability and social responsibility to help the community in which we operate engage our youth in the upcoming election in a new and meaningful fashion that is relevant to their generation.” says Michael Girgis.

As an incentive, players that register to vote and play are eligible to win a 50” HD TV. The poll closes Thursday October 21 at 5:01 p.m.. Toronto’s actual election will be held Oct. 25/10.

This entry was posted on Thursday, September 16th, 2010 at 08:25 @392 and is filed under Scuttlebut. You can follow any responses to this entry through the RSS 2.0 feed. You can leave a response, or trackback from your own site.