Panasonic says that its new light-weight LCD displays have been designed specifically for digital signage. Available in 42-inch and 47-inch, the full high-definition (FHD) LF20 series have a slim design of only 101mm thickness with an 18 mm bezel – however the company doesn’t say how light is light! 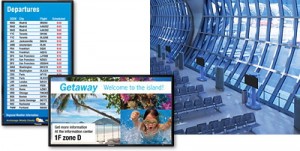 The new screens offer a high brightness of 700cd/m2 and an IPS panel for wide viewing angles, which allow images to display clearly in bright locations and high traffic areas, according to the company.

Whether it’s a single screen or multiple, there’s industry demand for bright displays that can deliver sharp, clear images when placed in open spaces with high levels of natural light, such as train stations, shopping centers, schools or banks.”

Panasonic’s fanless design eliminates dust build-up and lowers operating noise, which can often limit where displays are placed, said the company. Power consumption can also be controlled automatically as built-in sensors detect ambient lighting and automatically adjust the back light brightness to match the viewing environment, according to the company.

This entry was posted on Tuesday, October 19th, 2010 at 10:38 @485 and is filed under Scuttlebut. You can follow any responses to this entry through the RSS 2.0 feed. You can leave a response, or trackback from your own site.