DPAA Makes It Easy For Creative

‘We accept the DPAA Universal Ad Package. For our primary ad units, please use this.’ is the line likely to be seen on the first page of pitch proposals from U.S. digital place-based advertising networks if the Digital Place-based Advertising Association has its way. 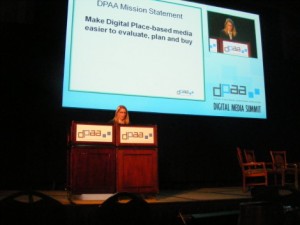 In one of the most significant developments announced during yesterday’s DPAA Digital Media Summit in New York, the association is strongly suggesting that all networks adopt h.264/MPEG-4 files for creative on any and all of the screen advertising shapes including the most common 4 x 3, 16 x 9, and 9 x 16.

The idea is to simplify developing the creative for agencies which, if asked to develop creative especially for the digital place-based sector, often baulked because of the numerous formats of the thousands of screens across the country. With the standard h.264/MPEG-4, the networks will have the responsibility of converting the files as required. This will also help alleviate agencies using the same creative from other media when it’s not particularly suitable to engage the consumer.

“Consistency = scale”, Bob Martin, chief marketing officer, RMG Networks, and Alan Schulman, chief creative officer UDIG – Digital Innovation Group, said in jointly unveiling the proposal to the audience of about 300. “There is a real need to speak the same language and common unit shapes and formats.”

The recommended file will cover about 90% of the advertising on digital screens and is considered the building block for other standards. For banner ads, 300 x 200 is under consideration but not yet recommended.

The DPAA hopes to see the recommendation to agencies be adopted by networks within three-to-four weeks.

Dirk Huelsermann, president of OVAB Europe, was in the audience and we fully expect him to recommend something similar in the European community.

This entry was posted on Thursday, October 28th, 2010 at 04:36 @233 and is filed under DailyDOOH Update. You can follow any responses to this entry through the RSS 2.0 feed. You can leave a response, or trackback from your own site.