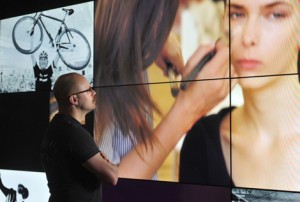 At the press event, Paul Smith used four of the screens to showcase backstage footage from their new spring summer 2011 catwalk collections for men and women. The remaining five screens played exclusive short films made by Sir Paul himself, including one of him riding with the Rapha Condor Sharp pro-cycling team. The versatility of the video wall allowed for six different films to be displayed at once creating a fully immersive viewing experience.

Sir Paul Smith commented: “We are looking to work more and more with moving images, and Sharp’s video wall at our press event was fantastic. It took the films to another level.”

Sharp screens are fully backlit LED displays ensuring that the unit delivers crystal clear, seamless eye-catching pictures and it consumes less energy. The displays, manufactured at Sharp’s Sakai factory, in Japan, have a brightness of up to 700 candela per square meter, meaning there is no drop-off in brightness even at the edges.

Darren Gaffey, Commercial AV Product Manager at Sharp Electronics (UK) said: “The modular nature of our PN-V601 allows companies to unlock endless possibilities to showcase films and videos in high-definition in whatever size or formation of video wall they choose. The nine screen video wall at the Paul Smith launch gave a display size of 13ft x 7ft, where competitive 46-inch monitors would need sixteen screens to produce a comparable wall. This allows significant reductions in overall purchase, installation and power consumption costs, depending on the final wall size.”

“This prestigious UK launch shows how successful the video wall can be in fashion and retail environments, as well as for more traditional digital signage applications, such as at trade shows, in corporate environments and as indoor advertising displays at airports or shopping centres.”

This entry was posted on Wednesday, November 10th, 2010 at 07:39 @360 and is filed under DailyDOOH Update. You can follow any responses to this entry through the RSS 2.0 feed. You can leave a response, or trackback from your own site.