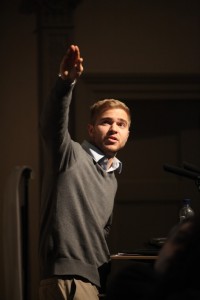 Text the homeless off the streets

The audience of more than 150 clients and agencies then voted for the winner.

The brief was to demonstrate how Clear Channel’s digital out-of-home screens can engage, excite and ultimately get people interacting with a chosen brand or cause. The theme could be anything that “makes life better – for people and for the planet.”

Oliver’s winning pitch aimed to harness the power of digital out-of-home, mobile and social media to text the homeless off the streets and into a new life. He proposed working with a charity to talk to homeless people, upload pictures and their stories to digital billboards and include the SMS number of a charity to text to. These texts would then contribute to a fund to help the homeless live a normal life again. Facebook, Twitter, YouTube and PR would all be used to amplify the campaign.

According to Oliver: “The campaign is an exciting opportunity to enter true and real life interaction with digital billboards. The pitch was a great possibility to integrate different media types into one campaign, while leaving it open to implement further elements into the campaign. Winning the pitch was fantastic, especially because I truly believe my campaign could do some good while having an impact on how we will interact with billboards in future times.”

Pip Hainsworth, Marketing Director at Clear Channel, said: “Congratulations to Oliver on a great idea and a fantastic pitch. It was wonderful to get students from the School of Communications Arts 2.0 involved along with some experienced agency pitchers at our event, and we look forward to working with them to help bring their ideas to life in the future.”

This entry was posted on Saturday, November 13th, 2010 at 08:55 @413 and is filed under DailyDOOH Update. You can follow any responses to this entry through the RSS 2.0 feed. You can leave a response, or trackback from your own site.

One Response to “Engage, Excite, Interact”