This Must Be The Place (Naive Melody) 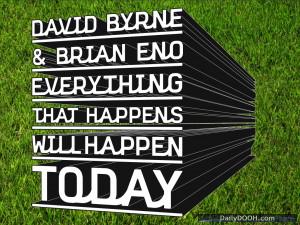 Over these last few months we have seen Daily visitor numbers grow and grow – seemingly, we tweet and people go read the blog, we email six times a week and people do the same.

We’ve had days in the last few weeks where almost 2,000 people have together visited the site 3,000 times! That double-dipping (one unique user visits the site in one day more than once) has been something we have been aiming for and we are especially pleased that people figure we are (sometimes) newsworthy enough to come visit us more than once (in their busy day).

Not all of you will read this on Saturday (when it is mailed out), some may pick it up on the weekend but half of you will wait ’til Monday to read but forgive us today (whatever day it is for you) if we share with you just a few pieces of our own exciting news: –

Exhibit 1. One of our new banner ads

As usual we’d like to thank all of our staff, contributors, advertisers and readers. Without you we wouldn’t be here. And we’ll leave you today by paraphrasing some words from David Byrne “Never for money, Always for love … Guess that this must be the place”

This entry was posted on Saturday, November 13th, 2010 at 08:09 @381 and is filed under DailyDOOH Update. You can follow any responses to this entry through the RSS 2.0 feed. You can leave a response, or trackback from your own site.