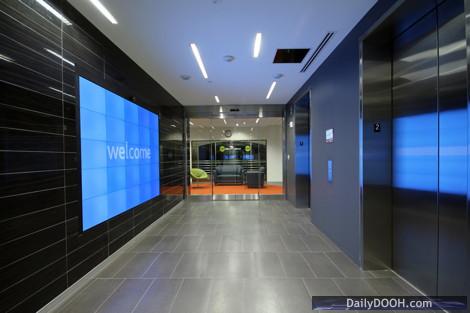 The Nielsen Company engaged Arsenal Media earlier this year to develop and execute a corporate communications project for the lobby of its executive offices in Wilton, Connecticut, north of New York City. The result is a very impressive project, as evidenced by the video case study Arsenal’s Denys Lavigne passed along…

The project makes great use of Christie’s MicroTiles in a _5X5_5T_5T_5T_5T_5T_ videowall in the main entry area, with a laser camera and motion sensor picking up gestures and manipulating the visuals. That’s done by Float4, which shares an old Montreal warehouse loft space with Arsenal. The wall runs off a Christie Vista Spyder video processor and a Real Motion interactive server. 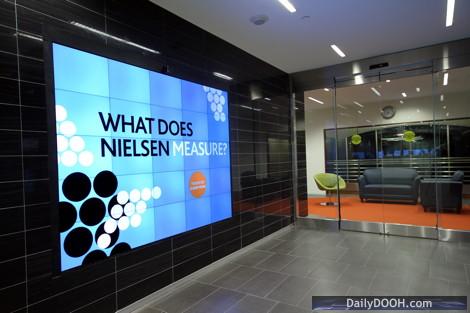 Deeper into the lobby, there’s a nice horizontal row of ultra-thin bezel Orion plasma displays running Welcome and consumer insights content in a six-minute loop. The content is mapped to screens or stitched across all six. As with the big wall, these displays run off a Vista Spyder. Key West software is used for the playback. 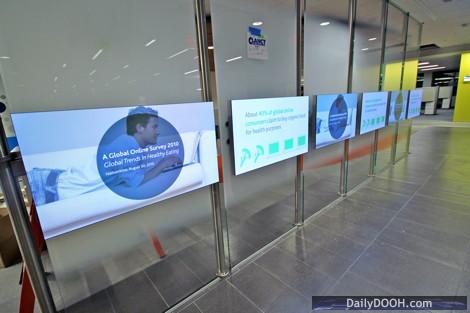 Then there is another, single LCD in reception that runs a seven-minute loop on quiz material about Nielsen and its consumer insights.

We’ve not seen a lot of good projects like this that have been led by a creative group. More often, these sorts of corporate communications projects are led by the Pro AV integrators and architects, and while they look very polished, the content is often an after-thought. 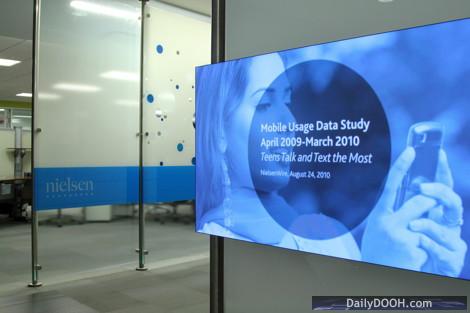 We also like the video case study concept, which is done too rarely for a business sector that runs on video. Showing the concept at the drawing stage and walking viewers through not only the visuals, but the strategy as well, is compelling. We’d like to see this done more often.

This entry was posted on Thursday, November 18th, 2010 at 07:14 @343 and is filed under DailyDOOH Update. You can follow any responses to this entry through the RSS 2.0 feed. You can leave a response, or trackback from your own site.