Right after hearing about Intel’s personalized campaign at Penn station, we learned that Intel is also introducing its Smart TV on the Las Vegas Strip via Clear Channel Spectacular. 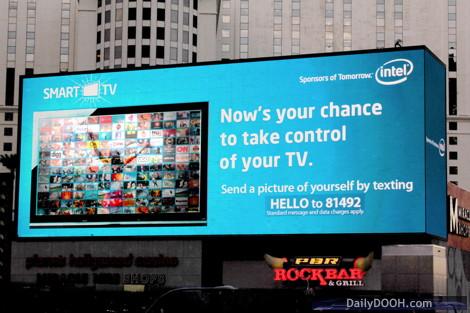 Smart TV, Intel’s inaugral venture outside the TV market, is integrated, interactive television that seamlessly marries the power of the Web to the television viewing experience.

Consumers visiting the Vegas Strip can text a phone number found on the digital screens airing Smart TV video shorts and, on receiving an e-mail link in response, can then upload a photo of themselves directly to all three screens to show their support for the new technology category – one of, if not, the biggest TV innovations since Technicolor. Each photo is displayed for six seconds as part of a larger rotation of the overall submitted photos.

This marks the first time that Intel has advertised on the Vegas Strip. (With 63 million visitors annually, the Vegas Strip is a top 10 market every month.) Additionally, this is the first campaign to make use of both Clear Channel Spectacolor’s Miracle Mile and Fashion Show spectacular properties and the first interactive component to run on the two properties simultaneously. 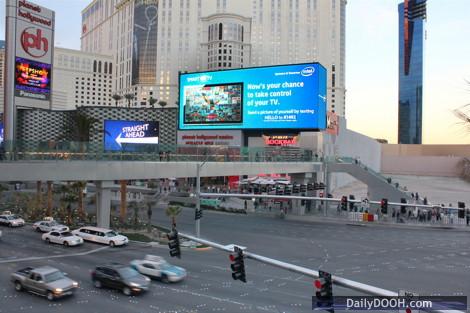 Venturing beyond the traditional parameters of the medium, Spectacolor’s digital properties provide an interactive, creative means to engage with consumers. In this case, the digital boards support digital video and mobile capabilities, and serve as an integral component of Intel’s Smart TV marketing program.

This entry was posted on Wednesday, December 22nd, 2010 at 19:01 @834 and is filed under Scuttlebut. You can follow any responses to this entry through the RSS 2.0 feed. You can leave a response, or trackback from your own site.