Swedish retailer H&M has a jaw dropping digital signage installation on its flagship store in the Champs-Elysees.  There are a total of eleven double sided 103in screens that move up and down the store and also go side ways on the top floor window. 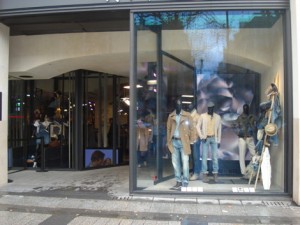 As the screens move, images change and I could have stood there watching for quite a while, (well okay if it wasn’t so cold and windy!).

In a way, this installation is a cross between a piece of art and digital signage. Sometimes the screens display posters with prices and some times they just have beautiful images.

The 2800 square meters store, opened in October last year, was designed by Jean Nouvel and H&M.

The lifting system to move the screens is incredibly big and you can actually hear a constant buzz inside the store. But what a spectacle!!

The French like it. This is the 140th H&M store in France and the 11th store in Paris. Expansion will continue to be a focus for France for 2011 with stores planned for both new and existing cities. The new Champs-Elysees H&M store is situated at 88 avenue des Champs-Elysees.

Lets keep our eyes peeled to see how H&M exceeds it self on new stores. 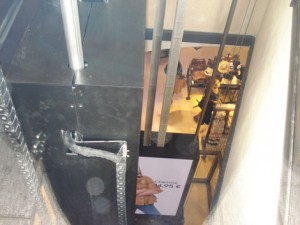 From the street window, looking down, you can see the strong chain sand poles where the screens slide up and down

Looking up from the street entrance, you can see the motor that lifts and lowers the screens. (the top of the head on the picture is the from a poster in one of the screens that had reached its upmost position)

This entry was posted on Thursday, March 3rd, 2011 at 21:21 @931 and is filed under DailyDOOH Update. You can follow any responses to this entry through the RSS 2.0 feed. You can leave a response, or trackback from your own site.