With screens so small on smartphones as it is, I have difficulty figuring out why I’d want the new Kyocera Echo, the first dual-touchscreen smartphone, launched in the U.S..

However, I guess if you are trying to perform two tasks at once, it could come in handy. 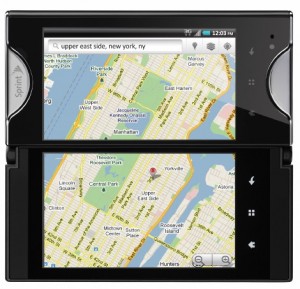 However, people must like it, because it’s been given ratings of eight out of 10 by Engadget and four stars out of five by LAPTOP magazine.

Available all Sprint retail channels, the innovative Android device is available for US$199.99 (excluding taxes) with a new two-year service agreement or eligible upgrade.

“We’re a multitasking society, always looking for more information and easier ways to do things in our mobile lifestyles,” says Yasuhiro Ohishi, president, Kyocera Communications Inc., San Diego. “We’ve heard tremendous feedback from people who’ve had the chance to experience the device, something we highly encourage consumers to do at any Sprint store.

“The mobile and computer worlds often build on each other, so we looked to ways in which consumers use their computers when developing Kyocera Echo since smartphones are essentially used as mini PCs every day. Drawing from these cues, Echo brings a new level of functionality to the Android smartphone.”

Kyocera Communications Inc. is the headquarters for Kyocera- and Sanyo-branded wireless products and accessories in the Americas.

This entry was posted on Tuesday, April 19th, 2011 at 09:55 @455 and is filed under Scuttlebut. You can follow any responses to this entry through the RSS 2.0 feed. You can leave a response, or trackback from your own site.