For the launch of Twentieth Century Fox’s new animated movie Rio, Clear Channel has created a campaign to run vacuum molded six sheets around the UK and in Milan. 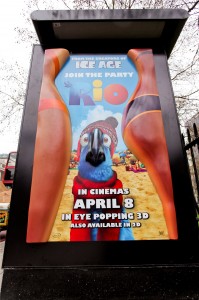 Booked by Posterscope and designed by Clear Channel’s Create Team, the six sheets show the main character Blu’s 3D beak poking out between two bikini clad ladies -also in 3D! The design was created using a special vacuum mold to create the 3D shape. The campaign, targeting a broad movie-going audience, started April 8 and will run for two weeks.

The outdoor campaign runs alongside TV, radio, press and online coinciding with the launch of the movie.

Neil Chapman, Group Head in Create at Clear Channel UK, said: “Outdoor is one of the most effective mediums for film launches due to its ability to deliver fun and engaging campaigns that mirror the feel of the film. It’s also perfect for reaching families when they’re together on the high street and kids when they’re out with their friends. The Rio campaign was designed to stand out, quite literally, promoting the film with a nod to its 3D format.”

Todd Huntley, SVP Europe Theatrical, Twentieth Century Fox, said: “We’ve been very happy with the innovative ideas Clear Channel has brought to us and in their execution across Europe.  We’re especially pleased with the cut-through provided by the Rio vacuum mold which we believe is a creative, fun and engaging way to promote our 3D movie.”

This entry was posted on Wednesday, April 20th, 2011 at 10:00 @458 and is filed under DailyDOOH Update. You can follow any responses to this entry through the RSS 2.0 feed. You can leave a response, or trackback from your own site.