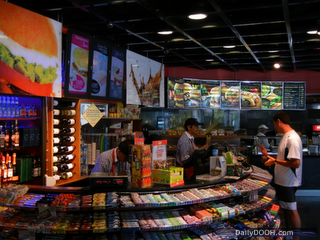 Pronto Copec wanted to replace its plastic printed posters and menu boards with a more cost effective and flexible solution that would allow it to update the content according to needs. It also wanted to be able to show different pricing in different regions in Chile, as pricing varies from area to area.

Baytex, one of Onelan’s resellers in Chile recommended Onelan and is, for the moment, also managing the content. At a later stage the petrol station’s head office will deal with the content itself.

So far four petrol stations have been installed. DS is used for menu boards, pricing and advertising. In some gas stations there are up to eight screens. The smallest installation is one Onelan Net-Top-Box (NTB) 510 driving a single screen, the largest comprises two Onelan NTB 5500s each controlling four screens to create a video wall.

This entry was posted on Friday, June 3rd, 2011 at 10:00 @458 and is filed under DailyDOOH Update. You can follow any responses to this entry through the RSS 2.0 feed. You can leave a response, or trackback from your own site.