Barco LiveDots, a Barco company based in Rancho Cordova, California, was selected to provide an innovative, 3D digital signage solution for Philadelphia International Festival of the Arts and the Kimmel Center, which comprises a performing arts center by the same name, as well as an upgraded Academy of Music owned by the Philadelphia Orchestra. 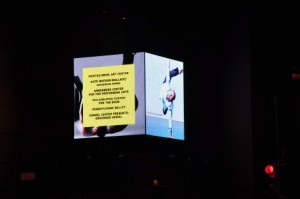 First commissioned and sponsored by the Kimmel Center, the three-dimensional Barco Live Dots signage ‘cube’ that made its debut in April to promote PIFA’s outstanding slate of performances and events during the 25-day festival, is now being used to promote the roster of events taking place at the Kimmel Center, The Academy of Music, and the Merriam Theater – all part of the impressive Kimmel Center Campus.

Perched on top of the corner of the main Kimmel Center building, the C11 LED display – designed in the shape of a cube – is located at the Kimmel Center’s main entrance on a busy downtown corner, advertising the Campus’s performances, live concert feeds, and visitor information with dazzling lights and variable sound.

“The new display provides visitors a glimpse into the diverse program offerings on the Kimmel Center Campus,” says Ed Cambron, PIFA’s executive director. “It captures our brilliant performances, the unsurpassed artistic merit of our Resident Companies, and the vitality of our city in a series of dazzling vignettes. It will undoubtedly become a beacon to the Avenue of the Arts as it lights up the Kimmel Center façade.”

In less than 100 days, the system was developed from concept to launch to ensure its completion prior to the festival’s start. Comprised of 72 C11 panels, the structure appears to float in the building’s alcove due to a reverse pyramid that masks the 10” pivot. Running on a cloud system, the cube can project five different sources including live video from inside the concert halls. Edwards Technologies Inc., El Segundo, California, worked closely with the Kimmel Center to design the optimum solution using Barco LiveDots LED.

The Kimmel Center wanted a unique, yet functional way to advertise its upcoming shows, while creating impact and intrigue at this highly visible city corner. The C11 is a truly modular LED display featuring 5,000 nits brightness, 11mm real pixel pitch and a 120-degree viewing angle, presenting crisp, clear imagery of video, graphics and type. Barco Live Dots management claims that the environmentally friendly display generates much less heat and uses only a fraction of the power consumed by competing displays. Suitable for both indoors and out, its IP66-rated fanless enclosure makes it completely waterproof to withstand the most challenging environments.

“The C11 is all about high impact and low power, offering a creative display solution at an economical price,” says Guy Russell, general manager of Barco LiveDots. “The cube fulfills the Center’s need for an eye-catching digital billboard that mirrors the same level of quality and sophistication portrayed in its world-class performing arts programs.”

This entry was posted on Tuesday, June 28th, 2011 at 10:00 @458 and is filed under DailyDOOH Update. You can follow any responses to this entry through the RSS 2.0 feed. You can leave a response, or trackback from your own site.