Brazil Is Calling You

Commuters at Euston station are being transported to the tropical beaches and historic tourist destinations of Brazil thanks to a four week campaign from the Brazilian Tourism Board (Embratur). 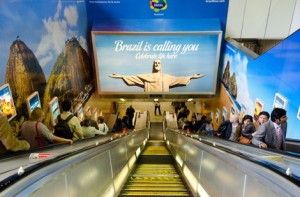 Booked with JCDecaux through IPM and Initiative Media, Embratur has wrapped the Euston Tunnel as part of a marketing drive to raise the country’s profile as an exciting holiday destination. The creative agency was Artplan, based in Brazil.

For four weeks the campaign will provide a fully-immersive brand experience covering 200 m² of tunnel linking the station concourse to the Underground. The campaign will reach a monthly audience of 530,000 people.

Flávio Dino, Embratur’s president said, “As the host of the 2014 FIFA World Cup and the 2016 Olympic and Paraolympic Games, Brazil will be the holiday of choice for increasing numbers of visitors. We increase our chances to attract more international tourists promoting the wealth of opportunity offered by Brazil.”

Panoramic images of the iconic Sugarloaf Mountain, golden sands of Ipanema and the dramatic Iguassu waterfalls are accompanied by five x digital 6-sheets and 20 x escalator panels. Embratur has also booked the back-light 48-sheet that greets passengers taking the escalator to the tube.

With the strapline, ‘Brazil is calling you’, the campaign directs people to the website www.braziltour.com.

This entry was posted on Thursday, September 1st, 2011 at 14:40 @653 and is filed under DailyDOOH Update. You can follow any responses to this entry through the RSS 2.0 feed. You can leave a response, or trackback from your own site.