NFC At The CIO Retail Summit

NFC or Near Field Communications generated a lot of questions, comments and ideas for its use at last week’s CIO Retail Summit in Arizona. 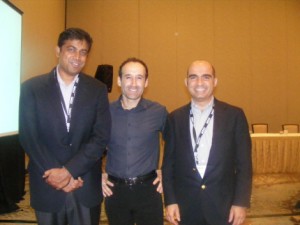 InsideSecure, a French firm with California offices discussed NFC as it involved, among other things, connections with the label on a bottle or one that’s built into a cereal package so that the shopper can get information on their mobile phone if it is held up near the product.

This new manufacturing technology combines the low cost of graphics printing with the power and functionality of silicon-based semiconductors.

Kovio’s vision is to enable embedded intelligence and connectivity in everyday products delivering price and performance unreachable by other technology. Once embedded in a label, for example, its product has a five to-10 year shelf life.

One product for which it could be suitable is wine bottles, suggested one attendant. The person with the smart phone could learn what kind of grapes were used in making the wine and other information about its origin, along with receiving a special deal.

The NFC technology is already embedded into some phones, but by holiday time 2012, it is expected to be in 100 different mobile devices. And with smart phones expected to comprise 44% of all phone shipments, both InsideSecure and Kovio really expect NFC to take off.

This entry was posted on Monday, September 5th, 2011 at 23:04 @002 and is filed under DailyDOOH Update. You can follow any responses to this entry through the RSS 2.0 feed. You can leave a response, or trackback from your own site.