Watchfire At The Wedding

It seems as if Watchfire is expanding one successful screen at a time. 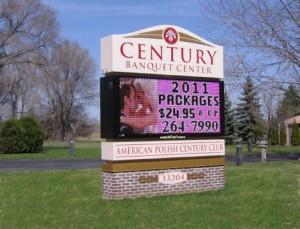 The latest we heard about is at the Century Banquet Hall in Sterling, Michigan, which was not attracting enough customers. But, located in the Detroit metro across the street from The Maple Lane Golf Course and at least a half-mile from any other restaurant, it is clearly a destination property.

Its existing signage wasn’t working. The 4’x 8’ two-sided letter sign was a chore, especially in winter, when no one wanted to go out in the snow and change the letters.

That’s when Gary Mruk, president of the American Polish Century Club which owns Century Banquet Hall. stepped up and convinced the Club to replace the sign with a colourful, digital sign.

The new Watchfire sign, which can be programmed from inside the building, includes eye-catching graphics. (Mruk says they are now ready for the day when the local authorities allow animated graphics.)

And in terms of business, the Century Banquet Hall is more than quadrupling the number of bookings for weddings and events. Whereas in 2009, seven weddings were booked, with the new sign in 2011, that number skyrocketed to 38.

Part of the reason is the customized use of the Watchfire sign. Before the newlyweds leave the church, a digital photograph of the happy couple is sent to the Hall and uploaded immediately to the sign. It is ready to welcome the wedding party guests when they arrive for the celebration!

This entry was posted on Monday, November 14th, 2011 at 09:57 @456 and is filed under Scuttlebut. You can follow any responses to this entry through the RSS 2.0 feed. You can leave a response, or trackback from your own site.