Digital UK, the organization that is managing the TV digital switchover, seems to choose not to go digital itself when it comes to its awareness marketing message. 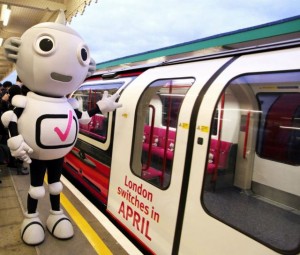 Although it has turned to outdoor for its latest advertising campaign, instead of using digital signage it has opted for static wraps, posters and upholstery.

As well as 600 T-Sides, and 1,000 supersides and interior bus panels targeting commuters a CBS Outdoor campaign (planned by MediaCom) has also turned an entire Central Line Tube train pink to raise awareness of the biggest change to broadcasting in a generation.

Digital UK’s character, a robot like personage called ‘Digit-Al’, will apparently also be taking to the tube trying to chat to passengers.

The train is wrapped in Digital UK’s distinctive magenta pink, as well as windows that form TV screens and switchover information on every train door. Furthermore, all Tube card panels inside the train advertise switchover and all 272 seats have been turned pink – err no further comment, your Honour, Ed

This entry was posted on Monday, January 23rd, 2012 at 10:00 @458 and is filed under DailyDOOH Update. You can follow any responses to this entry through the RSS 2.0 feed. You can leave a response, or trackback from your own site.