theBITE, created and produced by IndoorDirect, currently airs on IndoorDirect screens in 250 locations nationwide and will be in more than 1,000 locations by the end of the first quarter of 2009, with a presence in the top 25 DMAs in the country. 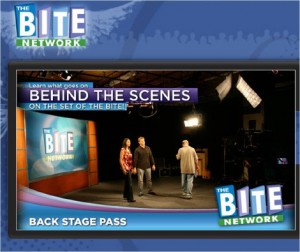 They claim that unlike other out-of-home advertising networks, theBITE reach is almost immediately measurable as it provides advertisers with specific information on how many people were exposed to their messaging in the dining locations when their messages aired – the idea being that each restaurant brand will have determined how many customers ‘dined in’ and therefore had exposure to the IndoorDirect LCD screens.

Ummm? Anyway, IndoorDirect says it will continue with its ongoing qualitative analysis with Arbitron and other research entities (including OVAB) and we look forward to all of that being published.

Fred Margolin, CEO of IndoorDirect told us “We believe theBITE dramatically raises the quality of out-of-home programming. As a powerful new digital media network focusing on quick-service restaurants, theBITE reaches its audience with ‘primary receptivity’ at a time when they aren’t distracted and are out of the house and ready to spend, making it an effective and measurable outlet for advertisers.”

Anyway, in an Arbitron study of IndoorDirect, nearly two-thirds of the group (which spanned all consumer demographics we are told) recalled at least one ad that was featured on the network. Other key research showed: –

The customers may not be distracted but surely they are sitting down stuffing their faces?

IndoorDirect is a powerful new digital media company providing entertainment content to high-volume quick-service restaurant chains across the nation. IndoorDirect operates theBITE Network — a combination of entertainment content and advertising, specially tailored to reach the millions of Americans who visit quick-serve and casual restaurants each month. theBITE Network features a weekly 60-minute lifestyle program with four dynamic hosts reporting on news, entertainment, music and sports. IndoorDirect LCD screens are located in restaurant dining rooms, as well as a promotional board at the point-of-purchase to highlight featured menu items. The company is privately held and has its headquarters in Dallas

This entry was posted on Friday, December 5th, 2008 at 00:02 @043 and is filed under Scuttlebut. You can follow any responses to this entry through the RSS 2.0 feed. You can leave a response, or trackback from your own site.