@Amscreen_Simon You’re Having A Larf Mate

Every now and again we feel compelled to roll out the rules for Gen 2.0 networks, put together so well by DecisionPoint Media Insights‘ Bill Collins back in July 2008. 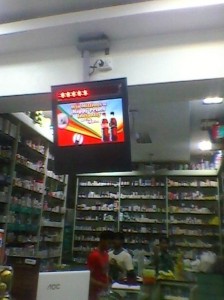 Yes. that’s right – almost four years ago! If we can bastardise the Hovis (bread) commercial† “they’re as good today, as they’ve always been!”

So why today especially did we feel a need to repeat these rules? Well over the weekend Simon Sugar* tweeted “Amscreen 1st #DigitalSignage install in Mumbai via @abakhrani #DigitalOOH pic.twitter.com/gGoDAXx3“ (picture shown to the right here) which breaks just about EVERY rule in the rulebook…

We had no qualms in telling Amscreen what we thought (“truly awful” is somewhat of an understatement) and Simon was quick to reply via twitter, we quote “@DailyDOOH @abakhrani it’s a trial deployment for operational purposes …relax we know how to do #DigitalSignage in retail”

“relax we know how to do #DigitalSignage in retail” really? Well there is absolutely no evidence that you do if you allow your brand to be associated with installs such as this.

It’s a flimsy excuse that it’s a ‘trial’ – there are surely more than enough reasons to make a trial site perfect (and something of a showpiece). Bottom line there’s an arrogance in operation here and someone’s not listening to what is well proven (and free) advice.

This entry was posted on Monday, February 13th, 2012 at 11:06 @504 and is filed under DailyDOOH Update. You can follow any responses to this entry through the RSS 2.0 feed. You can leave a response, or trackback from your own site.

7 Responses to “@Amscreen_Simon You’re Having A Larf Mate”