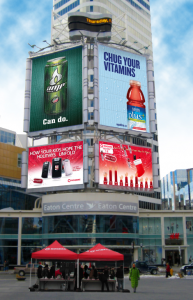 OBN secured the exclusive rights (for Dundas Square) to Montreal-based iGotcha Media’s software, and then went to MediaCom and Publicis, Toronto, the agencies for Rogers Wireless, to offer the promotional game.

The ‘Dial to Play’ software has been integrated into the operating system of the 40’ x 30’ video board on the Tower, enabling users of the new Rogers Wireless BlackBerry Pearl Flip smartphone to interact with the giant video board. 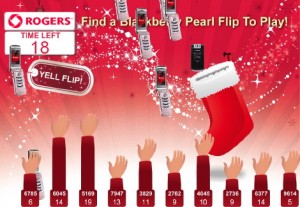 Rogers will have event teams at Yonge-Dundas Square until the end of December, inviting up to 10 people at a time to try out one of the new BlackBerry Flip smartphones and to play the game in real time. Game players control their actions by shouting ‘Flip’ into the mobile phones which, through voice recognition, controls each player’s avatar hand reaching up to a Christmas stocking to grab phones that appear to tumble from the sky. OBN has incorporated the game into the regular programming run of advertising on the video board.

This is a new example of the dynamic promotional capabilities of digital out-of-home – as well as an example how OBN leverages technology to reach and engage target audiences for its clients.

This entry was posted on Thursday, December 18th, 2008 at 08:11 @382 and is filed under DailyDOOH Update. You can follow any responses to this entry through the RSS 2.0 feed. You can leave a response, or trackback from your own site.