Bringing You News From Brazil

The company Ya Mogu was created in Rio de Janeiro some three years ago by serial entrepreneur, Roberto Bradford. Daniel Benford, creative director was one of the first recruits, straight from video school, and finance director Alberto Montezuma, who has an impressive track record with multinationals both in & out of Brazil has just joined his long term pal, Roberto.

Initially their offices were situated in the exotic sounding Copacabana district, but had moved to the more sedate colonial villa area of Humaita when I visited them recently.

Ya Mogu provides different levels of service according to their customers’ requirements.

In Rio, they operate the Conversa Fiada Bar chain digital signage network with remuneration coming from media sales. The installation includes Plasma screens and digital projectors in the six bars of the chain, four of which located in the wealthiest areas of Rio de Janeiro (Ipanema, Leblon,Jardim Botânico and Barra da Tijuca) and two other in vacation cities less than 2 hours drive (Angra dos Reis and Itaipava). Content is developed specifically for the audience profile, which is typically above 30 years of age and in the top income bracket. Its reach, during summer, is of about 60,000 customers.

Nationally, they provide ASP services to end users such as:

The chain counts over 220 stores throughout Brazil and is considered among the top three food franchisers in the country. The Digital Menu Board is configured with 22” widescreen LCD screens showing content scheduled online by Rei do Mate with the ability to update content and promotions at the store level via the web.

Rei do Mate is very well known for its traditional Mate (ice tea) and pão dequeijo (cheese bread) but, the chain is trying to become more widely recognized as a coffee/Mate (tea) shop. The project eliminates the previous visual clutter and emphasizes a diversity of other high margin products in a renewed communications approach.

Ya Mogu also provides ASP services for several clients who operate their own Digital Signage business using their technology. Some of the end-users being serviced by these third-party operators are:

Agraria (a large agri-business in the southern state of Parana) 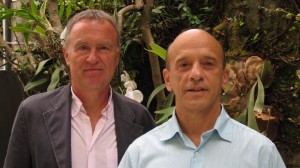 Ya Mogu is partnered with both Scala and Broadsign. They have an in-house technical director, but outsource most of the physical side of installations. One of the new technical challenges that they’re currently involved in is a project to create a TV channel especially for buses, the most popular form of transport in South America  – Sao Paulo alone has 18 000 of them…!

Brush up your language skills and check out this presentation:

Roberto Bradford is very upbeat about the start to 2009. The company is about to close two interesting deals and has received positive signals from other clients that have confirmed their willingness to go ahead with their Digital Signage plans in spite of the current economic crisis. Many are betting on the growth of the DS market during the crisis on the assumption that many advertisers will prefer to invest scarce resources in segmented media rather than allocate small funds to large and mass media advertisement.

Ya Mogu! roughly translated from Russian is “Yes We Can” – AND yes, I know we’re in Brazil) but if you want to know why the company name has Russian origins, you’d better ask Roberto – he tells it much better than I do!!!

This entry was posted on Thursday, January 8th, 2009 at 19:57 @873 and is filed under DailyDOOH Update. You can follow any responses to this entry through the RSS 2.0 feed. You can leave a response, or trackback from your own site.