A display of 134-unit Christie MicroTiles emulates the breathtaking majesty and jagged peaks of the Rocky Mountains† – complete with spectacular video footage – at the History Colorado Center. 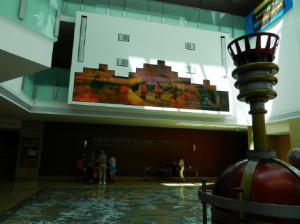 The Center, which recently celebrated its grand opening, wanted a large, expressive statement characterizing the history of the picturesque state while redefining the museum with relevant and engaging content.

“The HCC wanted a dazzling display in its atrium,” says Howard Steele, director, Technology Plus, the project’s consultant.

“The atrium is very bright and only a 30K lumen projector would even begin to display images in that strong light, but that created issues with where to place the projector and exhaust.”

Ed Nichols, president and CEO, Colorado History Museum, says, “We had a wall in our atrium begging for a major media treatment because there was a visitor orientation problem. We thought of projectors but the architect introduced the museum to the Christie MicroTiles. As our staff contemplated the possibilities with a MicroTiles wall, we were intrigued with the idea of letting the wall tell the museum’s story to its visitors.

“The Museum also liked MicroTiles’ flexibility: they are high resolution, high visibility in bright light at different angles and distances. We wanted rear projection and a product that would be financially sustainable. The tiles have a long lifespan, which means a low cost of ownership.” 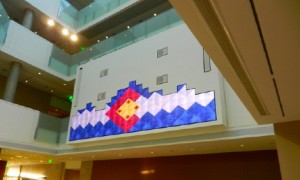 “It was Randy Pagnan of RP Visuals who made the mounting support brackets for the design– which really made it all come together and align properly,” says Steele.

“The atrium is very big and full of daylight pouring in – especially from the south facing glass wall and the skylights,” says Stephanie Stewart, project manager, Richard Lewis Media Group.

“When the museum saw the color saturation of the Christie MicroTiles, they went crazy; they loved how beautifully bright and crisp the images are – and so do we. The MicroTiles fit perfectly with what the museum is trying to say.”

“We also have the option of reconfiguring the wall if we want to change things up or even growing the wall, and, in the end, we have great products (Christie MicroTiles and Spyder) that are running consistently,” continued Stewart. “This project was huge and both an artistic and technical challenge, but that made it exciting.

Dan Waltens, director of operations, AVI-SPL, says the project went smoothly. “Having worked with Christie in the past, we had that level of comfort when working on a project of this scope. Christie knew every detail, was involved in the project meetings so they understood what the HCC was trying to accomplish, and gave appropriate advice – that was key. The beauty of Christie MicroTiles is that you can access the power supply from the front as well as the back.”

“What we have is so different because a high-tech array in the atrium is an immediate signal to visitors that this is not a typical state history museum,” concluded Nichols. “The Christie MicroTiles array captures the magnificence of the Colorado landscape and furthers our mission in a financially sustainable manner.”

This entry was posted on Tuesday, July 10th, 2012 at 11:00 @500 and is filed under Scuttlebut. You can follow any responses to this entry through the RSS 2.0 feed. You can leave a response, or trackback from your own site.