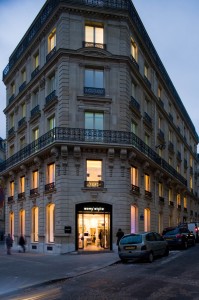 What do Armani, Kenzo, Givenchy, Bulgari, the Crazy Horse Saloon and, err, Sony all have in common? Well, they all have style ! Because they all (now) have their prestigious outlets on Paris’ swanky Avenue Georges V, right next to the Champs Elysées.

With 194 Sony Style Stores already open world-wide, the choice of location was a strategic one. The Paris Sony Style Store is situated in what is known as the ‘Golden Triangle’, surrounded by some of the biggest names in fashion and within walking distance of several 5 star hotels.

The three floors all have individual themes: the ground floor is ‘Sony United’ featuring the most popular products on sale in France as well as a ‘Direct from Tokyo’ zone pre-viewing the latest technology, plus a ‘Training Room’. The first floor is ‘Sony with Me’ where you can try out all the mobile devices around a bar or test-bench concept. And in the basement is ‘Sony at Home’. Emphasis is placed on advice and experience. A staff of 20 are on hand to advise and assist. There are 800 products on display, 80% of which can be touched. 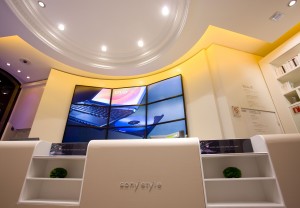 For a company that’s about to lose a billion dollars in one year, no expense appears to have been spared. In total there are 120 full HD screens (LCD and OLED) fitting into 1 000 m² of floor space spread over the three floors. The whole lot is driven by 90 players (almost exclusively all PS3) and controlled by Sony’s very own Ziris software.

The installation was carried out by Sony PSE France (also responsible for an excellent installation in the French Post Office) and is as much a showcase for their technology as it is for the consumer division. 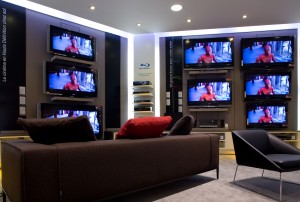 Throughout the store, the 40 7” LCD touch-screen consoles serve two roles: to guide & inform customers and to provide feedback to Sony’s marketing departments. They were apparently developed for this outlet and we can expect them to re-appear on future installations. 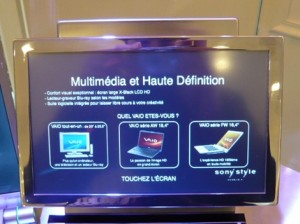 Unfortunately, on the day of my first visit, the gremlins had gotten there before me and the store was temporarily closed. Apparently some problem with the alarm system was blocking the emergency exits so, for our comfort and safety, we weren’t allowed in. An eager team of earnest young men dressed in black and sporting security tags was on hand to hold the crowd at bay.

PS. We got in eventually!!

This entry was posted on Monday, January 19th, 2009 at 03:16 @178 and is filed under DailyDOOH Update. You can follow any responses to this entry through the RSS 2.0 feed. You can leave a response, or trackback from your own site.