If there was ever an example of how digital menu boards are effective, Bob Sykes Bar-B-Q in Bessemer, Alabama, might be the perfect case in point. 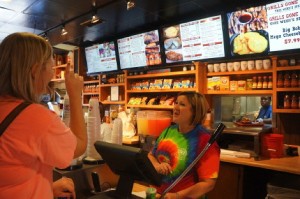 The company claims a 300% sales increase on selected food items that are featured since installing its new digital boards.

Bob Sykes has been owned and operated by three generations since 1957. Van Sykes, the second generation who started working at Bob Sykes as a small child, says, “Photos have always sold food but digital photos and video really sell food.”

Bob Sykes and Highland Digital Media, Hoover, Alabama, teamed up earlier this year to launch the on-premise digital network. Bob Sykes is now able to display more menu items than ever before. The entire process is easy and Sykes says, “Additionally, for customers, it’s a much cleaner look, and it’s easier for them to find items. Our customers like the picture quality and the more modern, contemporary look these boards bring to the restaurant.”

The digital boards have also given Sykes the opportunity to create new menu combinations that he never could do before the boards.

“We didn’t have the food items up anywhere before we got the boards because we didn’t have any space,” Sykes says. “Now we have the newest and most popular combination that consists of a regular bbq sandwich and two rib bones on the plate. The plate is on the menu board, and that is what has made the difference. We sold 30 plates just in the day shift the first time the photos were displayed.”

To further measure the results from the new system, Bob Sykes promotes its weekly Taco Tuesday on the board. Sykes sold around 20 tacos in a full day since he started this special three years ago. When the bbq pork taco photo was posted on the board with the video of an employee making the tortillas, the sales increased up to 40 tacos just at lunch every Tuesday.

The digital menu boards have created better communication and engagement with the customers; have helped in raising the average transaction spent, by highlighting specific offers and extending menu choices; and the quarterly sales results continually show impressive uplift across most menu categories.

This entry was posted on Friday, October 26th, 2012 at 10:00 @458 and is filed under Scuttlebut. You can follow any responses to this entry through the RSS 2.0 feed. You can leave a response, or trackback from your own site.