Multiple configurations of 425 Christie MicroTiles are lighting up the windows of Barneys New York flagship store at 660 Madison Avenue, for its ‘Electric Holiday’ display that brings the world of high fashion to life in brilliant colors. 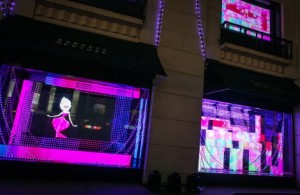 The short is the highlight of the high tech light show, accompanied by an original score by Oscar-winning composer Michael Giacchino.

Following the world premiere on Nov. 14/12, the eight-minute art short will continue to loop throughout the day on the Christie MicroTiles. The window displays will be up until Jan. 3/13. if you are visiting New York over the holidays, Christie is inviting you to post your photos on its Facebook wall.

“We are thrilled to be working with the experts at Christie on Disney Electric Holiday Windows at Barneys New York,” says Lylle Breier, senior vice-president World Wide Special Events, Walt Disney Studios. “Disney and Barneys wanted to create a visually stunning window display unlike any other and the Christie MicroTiles – with their high resolution, shallow depth, virtually seamless canvas and true-to-life image quality – made that possible. Utilizing 565 sq. ft. of MicroTiles and 50 million pixels, we are able to create a brilliant light and video show that will light up Madison Ave throughout the Holidays.” 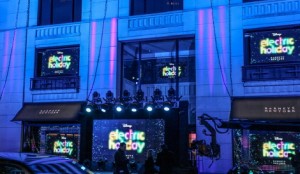 “‘Electric Holiday’ is a stellar combination of state-of-the art animation, lights, music, and fashion that will encompass eight windows of Barneys New York’s Madison Avenue store,“ says Sean James, vice-president, Managed Services, Christie. “It represents one of the most complex combinations of shapes, resolution, size and depth of field ever used with the Christie MicroTiles. From the realization of the high-concept moving art short to the multi-layered arrangement of MicroTiles, it is a triumph of technical, creative and artistic vision never seen before on a holiday window display.”

Christie’s Managed Services team provided technical consultation at every stage of the installation, from concept finalization, to pre-staging, to on-site set-up, expanding on its long history of collaboration with Disney. Each window features an array of Christie MicroTiles in a staggered, multi-layer set-up of various shapes and depths, surrounded by bright meshes of lights that are synchronized with the music.

The shallow depth of the display windows presented an especially daunting challenge, eliminating technology that required substantial space. Flat panels were considered, but their thick bezels significantly distracted from the display, which needed to appear nearly seamless. Christie MicroTiles were the answer. Lightweight and shallow rear projection modules approximately 16” x 12”, they are less than a foot deep and fit perfectly in the store windows. More importantly, they have a nearly invisible 1mm gap between the tiles for seamless images and could be scaled to any size, shape and orientation, forming a digital canvas of the highest brightness and resolution. As well, with a viewing angle of 180 degrees, every view from the street offers ‘the best seat in the house’, regardless of where one is standing.

The digital canvas composed of 425 MicroTiles in a combination of portrait and landscape modes, generates the equivalent of a 600 sq. ft. image spread across 2,275 sq. ft. of building. The complex design of the display includes:

“’Electric Holiday’ is truly a collaboration of some of the ‘best of the best’ in the world,” says James. “Achieving such a technological and creative triumph required a true partnership of trust among all the contributors. It represents the best in fashion from Barneys New York, the best in Entertainment from Disney, and the best in visual technology from Christie.”

This entry was posted on Friday, November 16th, 2012 at 07:00 @333 and is filed under DailyDOOH Update. You can follow any responses to this entry through the RSS 2.0 feed. You can leave a response, or trackback from your own site.

One Response to “MicroTiles, Disney and Barney’s Collaborate On Display”