The Piccadilly Lite digital LED screen, which measures 23m by 2m, reaches a young, affluent audience in excess of 2.2m per fortnight and here we see it being used tactically over a 24 hour period on Valentine’s Day by Macmillan to promote Chelsea Cain’s new book Sweetheart. 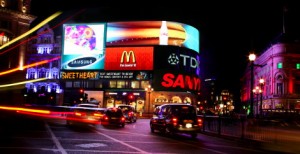 Booked through Clear Channel Outdoor’s Pinnacle division, the advert invited consumers to ‘TEXT SWEETHEART to 82100 for bonus content and 50% off.‘

Those that texted in were taken to a mobile microsite where they could interact with the novel, the author, read an extract, see author interview, download screen savers of Chelsea Cain’s book jackets and also receive a 50% off voucher to purchase Sweetheart which they could redeem at any Borders store or via www.borders.co.uk

Piccadilly Lite forms part of Clear Channel Outdoor’s Pinnacle division – the number one collection of premium outdoor sites in the UK. Launched in December 2007, the site marks the first time in almost a century that such a flexible advertising opportunity has been offered at the Piccadilly Lights location and it enables clients to generate maximum impact on the highest resolution, animated screen in the complex.

The UK’s leading real estate investment trust, Land Securities, which has owned Piccadilly Lights since the 1970s, developed Piccadilly Lite to allow more advertisers to benefit from the global exposure the site provides. Clear Channel Outdoor, the world’s largest outdoor media owner, is now working with MT2 – the sole managing agents of Piccadilly Lights – to enable brands to tactically advertise their campaigns and fully realise the flexibility of digital outdoor.

This entry was posted on Monday, February 16th, 2009 at 10:01 @459 and is filed under Scuttlebut. You can follow any responses to this entry through the RSS 2.0 feed. You can leave a response, or trackback from your own site.