We attended the second of two business upfronts held by RMG Networks in New York over the last few days, and by the reaction of the audience of agency representatives and advertisers attending (90 on Friday; 102 on Monday) bolstered as well by many of RMG’s own staffers, we should expect to see a lot more consideration towards putting ad budgets on RMG’s double networks geared to reaching the business executive. 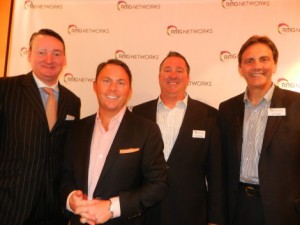 RMG executives put on an extensive show combining film, detailed information charts and solid talks to show details of RMG’s Executive Network (airports, airline lounges and in-plane screens) and its new (launching Jan. 1/14) Office Media Network. Combining the two would allow an advertiser to reach the business executive at every turn: in offices and office buildings, in airports, lounges, and in planes, all “where there are bums in seats and with long dwell times,” said Garry McGuire, RMG Networks’ CEO.

MaGuire said that with video combining sound, sight and motion is becoming so prevalent in the business, he is now positioning RMG as a video ad network company, a DOOH2 company with connectivity, long dwell times, large format screens, sound, sight and motion, and more. We learned that RMG is converting its products in airports lounges to 84” HD screens (and McGuire told us privately that he expects these screens to soon offer Bloomberg News and lifestyle programming similar to that being offered on the Office network.) 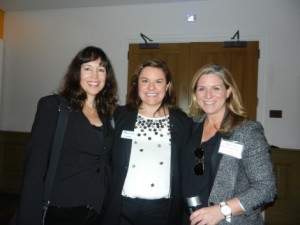 He said that at a recent conference of CMOs (chief marketing officers), he learned that 90% of CMOs are being asked by their CEOs to spend better and to look closer at digital, and that 70% of the CMOs are actually solidly considering digital, which augers well for the industry.

While a lot of the audience were aware of the Executive Network, they were brought up-to-date about the 35 million visitors on airlines per month and the wi-fi capabilities now available. 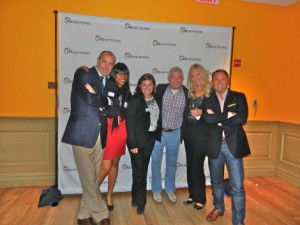 And for the office network they were told that the offices of partner Regus are not only for start-ups and small businesses, but for large businesses as well, with 55% of the people who come into Regus offices coming from Fortune 500 companies.

It was a solid sell, with the two networks together offering mass, highly targeted reach nationally and internationally, a message that McGuire is considering taking on the road further, with possible additional upfront shows in such cities as Chicago and Los Angeles.

This entry was posted on Tuesday, October 22nd, 2013 at 03:55 @205 and is filed under DailyDOOH Update. You can follow any responses to this entry through the RSS 2.0 feed. You can leave a response, or trackback from your own site.