Montreal-based company Float4 recently deployed its first interactive wall in a hotel environment, installing it in the lobby of the newly built Mere Hotel located in the heart of Winnipeg’s cultural district. 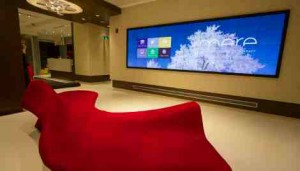 The newly built Mere Hotel is located in the heart of the cultural district in Winnipeg, Mantoba.

The Christie MicroTiles wall of 12X4 tiles features informational, entertainment and artistic content, as well as gesture and multi-touch interactivity. It also includes a content management system, developed in-house by Float4, that allows the client to add, edit or remove content, without Float4’s intervention.

The objective in this project was to optimize the guest experience in a fun and engaging way, by combining contemporary design and cutting-edge technology, while reflecting a ‘Pure and Simple’ mindset that defines Mere Hotel. In this sense, Float4 worked alongside the client to provide an interactive experience that complies with the boutique hotel’s identity and values.

Content serving informative purposes, such as local information, historical content and hotel services, is static and fully editable inside the content management system. Real-time content driven by Internet data, such as the weather, local news and airplane schedules, is updated automatically on the digital wall. It is also possible to output a TV feed or custom presentation into the wall by selecting the right mode into the CMS.

Further, an artistic application has also been developed to allow users to create their own artwork, as they move and touch the screen. Various pictures of nature serve as background for the entire wall, and evolve according to the season, time of day, and weather. The menu board’s color range also varies accordingly to the time of the year.

This entry was posted on Sunday, March 9th, 2014 at 10:00 @458 and is filed under Scuttlebut. You can follow any responses to this entry through the RSS 2.0 feed. You can leave a response, or trackback from your own site.