Premier Retail Networks, Inc. (PRN) announced earlier this week that advertiser recall for its Checkout TV Network surged to 60 percent in 2008, up 18 percentage points from a similar study conducted in 2007. 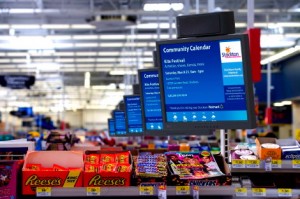 The 2008 Checkout TV Recall Study, conducted by GfK Custom Research North America in six major retail markets, revealed an average brand recall of 60 percent, with some individual brands delivering results as high as 91 percent. The study also revealed that 70 percent of consumers who viewed participating ads reported that it influenced their intent to buy the product in the future.

U.S. viewership for Checkout TV is quickly approaching the 100 million mark with 2008 viewers increasing 8.4 percent to 94.6 million viewers every four weeks, according to a separate viewership study conducted by Knowledge Networks Inc.

Richard Fisher, president of PRN worldwide told us “2008 was a great year for our Checkout. In only four years it has become one of PRN’s most compelling networks because it serves retailers, shoppers and advertisers equally well. With this year’s increases in ad recall, viewership, distribution and advertisers, we can show that the market is really embracing this network and we look forward to even more growth in 2009.”

Checkout TV is currently being expanded internationally with the installation of 4,900 additional screens in Latin America – the Checkout TV Network is now seen on more than 22,000 screens worldwide.

Headquartered in New York, GfK Custom Research North America is part of the GfK Group. With home offices in Nuremberg, Germany, the GfK Group is fourth largest market research organization in the world. Its activities cover three business sectors: Custom Research, Retail and Media. With 115 companies covering over 100 countries, GfK Group has approximately 10,000 employees (as of September 30, 2008), 80% of which are based outside Germany.

This entry was posted on Thursday, March 26th, 2009 at 11:48 @533 and is filed under DailyDOOH Update. You can follow any responses to this entry through the RSS 2.0 feed. You can leave a response, or trackback from your own site.