Day 2 of #dsj2011 saw even more excitement around Scala’s debut of SignChannel and we learnt a little more about what is actually on offer. 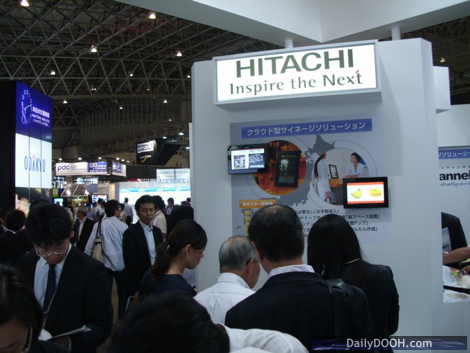 First off it’s obviously a MAJOR launch for Scala of their Japanese version of SignChannel – as previously noted managed completely by Hitachi.

Scala were showing a full Japanese user interface as well as a number of built-in Japanese language content channels. It looked to us like some of which Hitachi must have licensed from Yahoo Japan.

People really seem to understand SignChannel and love both the concept and simplicity as well as the various (Hitachi) device choices.

This entry was posted on Thursday, June 9th, 2011 at 17:42 @779 and is filed under Scuttlebut. You can follow any responses to this entry through the RSS 2.0 feed. You can leave a response, or trackback from your own site.

One Response to “#dsj2011 SignChannel Excitement”