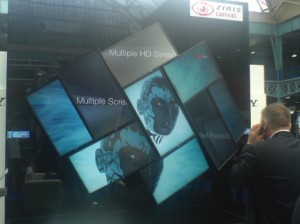 There is MUCH better screen technology than this coming later this year so don’t go out and buy one of these.

Nevertheless this clever grouping of screens from Sony impressed and interested a lot of people at Screen Media Expo Europe.

Sony’s video wall was in a nine screen ‘football’ type concave arrangement. The screens were running content powered by Sony’s Ziris Canvas digital signage software BUT the thick bezels got in the way to our thinking, it looked like every screen was powered by its own PS3 and the content wasn’t particularly compelling but as we said, it generated a lot of interest.

This entry was posted on Wednesday, April 8th, 2009 at 13:05 @587 and is filed under DailyDOOH Update. You can follow any responses to this entry through the RSS 2.0 feed. You can leave a response, or trackback from your own site.