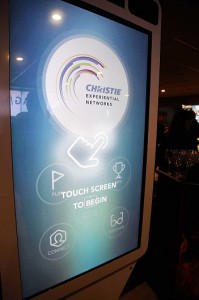 Part of Christie Experiential Networks’s nationwide roll-out that is on track for 200 theatre lobbies in North America this year, the wide array of innovative solutions includes three ‘digital posters’, including interactive Christie 65” LCD panels; a ‘hero wall’ composed of eight 55” screens in a herringbone pattern; and a video strip composed of eight 40” LCD screens.

A premiere movie and dining experience, the new Emagine Palladium offers upscale features and amenities that are raising the bar for out-of-home entertainment. In addition to stadium-style auditoriums with huge screens and the latest in digital cinema and sound, the Emagine Palladium offers VIP membership opportunities, priority seating, a full service bar, and in-theatre dining – all in an exceptionally comfortable and intimate environment.

“We are committed to providing moviegoers with a compelling reason to come to our venues for their entertainment,” says Paul Glantz, co-founder and chairman of Emagine Entertainment Inc.. “We enhance the quality of their experience and create a value proposition for them by making our theatres more than a place to see a movie, but also a complete destination for dining and entertainment. The lobby plays an important role in communicating the immersive nature of their experience, and the Christie Experiential Network’s state-of-the-art signage is an integral part of our strategy.” 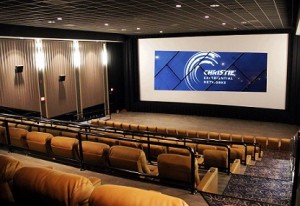 “Just as CEN has done with Emagine Palladium, we create a new and exciting digital advertising network within the theatre lobbies of our exhibitor partners as well as expanding upon existing systems to generate incremental revenue,” says Kevin Romano, senior director, Global Media Networks, at Christie.

“We manage all aspects of the network including sales, content creation, interactive programming, deployment, nationwide monitoring, and maintenance.”

The Christie Experiential Network is the first fully-integrated, digital-out-of-home advertising network that gives brands and studios access to a truly innovative visual platform to connect with today’s tech-savvy consumers. Advertisers can increase their reach and engage consumers by leveraging Christie’s experience and renowned technical expertise.

This entry was posted on Thursday, October 15th, 2015 at 07:00 @333 and is filed under DailyDOOH Update. You can follow any responses to this entry through the RSS 2.0 feed. You can leave a response, or trackback from your own site.