Hardly Spontaneous And Not Viral 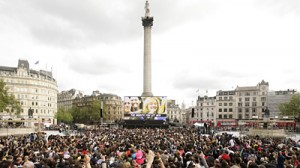 Forgive us for once again being cynical but seriously;

Note To Saatchi & Saatchi, note to T-Mobile, it’s hardly viral (and hardly spontaneous either, see comments below) if you spend hundreds of thousands of pounds, hire dozens of actors to pretend to be the public, have a backdrop of 13,000 ‘volunteers’ hanging around in the background hoping to get in a sniff of the video, ask Pink to ‘surprisingly’ turn up and then get lots and lots of pre-coverage in the mainstream media.

The original T-Mobile ‘Dance’ advert at Liverpool Street was original and incredibly well done, it’s a shame that this is also being described as the ‘latest viral ad campaign for a mobile phone’.

This entry was posted on Saturday, May 2nd, 2009 at 10:50 @493 and is filed under Scuttlebut. You can follow any responses to this entry through the RSS 2.0 feed. You can leave a response, or trackback from your own site.

4 Responses to “Hardly Spontaneous And Not Viral”