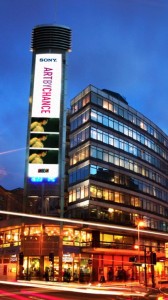 The festival which has been billed as the ‘largest public art event ever’ is part of a global event that is being broadcast across 16,000 screens in 14 countries in 64 cities and may reach an estimated 188m people worldwide.

In the UK, the Sony sponsored film festival can be seen in shopping malls and city centres nationwide and is being broadcast to an estimated audience of 25m.

Based around the theme ‘Journey’, 30 film entries have been picked out by a panel of judges from over 700 ‘30 second’ short film entries and will appear on screens until 3rd June.

This entry was posted on Thursday, May 28th, 2009 at 16:42 @737 and is filed under Scuttlebut. You can follow any responses to this entry through the RSS 2.0 feed. You can leave a response, or trackback from your own site.