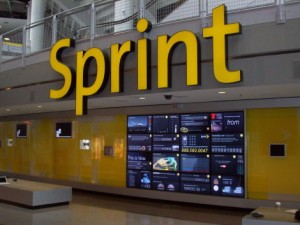 Sprint’s 3D depth sensing interactive display screen, with mobile phone connectivity, can track people’s body movements and respond by sending a Sprint promotional message that follows them whenever they walk in front of the interactive billboard. The interactive motion-detecting advertising message users to create their own personalized interactive wall art on Sprint’s gesture control screen, by calling Sprint on their mobile phone.

Other organizations using GestureTek’s 3D vision control system, include the B.C. Olympic Secretariat and Hitachi. The B.C. Olympic Secretariat commissioned five interactive 3D depth sensing flight simulators, featuring GestureTek’s 3D hand tracking interface, for use at the Beijing and Vancouver Olympics. Users interact with the attraction, called the B.C. Explorer, with simple, intuitive gestures. They control the experience of flying over 3D real-time satellite texture maps of the province of B.C. by tilting, rotating or making a fist with their hand.

“GestureTek ‘s 3D tracking technology, embedded in the Hitachi gesture control television set, has sparked such interest that we have been conducting live demonstrations in forums such as the Wall Street Journal’s ‘All Things Digital’ Conference and The Today Show,” says Francis MacDougall, GestureTek’s co-founder and chief technology officer.

Hitachi uses GestureTek technology in its gesture control television prototype. With a 3D depth camera and GestureTek’s patented tracking software, the system allows users to control a TV with hand gestures instead of button presses. It recognizes a wide variety of poses and gestures, including swipes and waves.

The gesture control television set captured people’s imagination when GestureTek demonstrated the technology at the Wall Street Journal’s ‘All Things Digital’ Conference. A similar demonstration was to be aired recently on The Today Show.

“The trend to gesture control spans far beyond just television sets and digital signage,” says MacDougall. “We have licensed our patents and technologies in various ways to a multitude of consumer electronics providers, including for PlayStation, Xbox 360 and Hasbro. We are also working with major telecom companies and electronics manufacturers to enable gesture control for their set top boxes, consoles and other consumer devices.”

This entry was posted on Thursday, June 18th, 2009 at 11:07 @505 and is filed under DailyDOOH Update. You can follow any responses to this entry through the RSS 2.0 feed. You can leave a response, or trackback from your own site.